After initially working together on television presenter Max McMurdo‘s first container build, which was featured on “George Clarke’s Amazing Spaces”, we have teamed up with Max and his company Reetainer to bring you beautiful container buildings.

Max McMurdo established Reestore Ltd in 2002 when he became uneasy at the consumption focused ways of the traditional design world. By 2007 Reestore had won several design awards and featured in many galleries and exhibitions, however it was barely covering the overheads. Max decided to pitch Reestore on BBC’s “Dragons’ Den” where he secured investment from Deborah Meaden and Theo Paphitis.

With their investment and input Reestore has grown from a hobby fueled by passion to one of the UK’s most respected and renowned designers and manufacturers of upcycled products. Reestore now have a client list that includes The Body Shop who have purchased over 200 bath tub chairs for their stores worldwide, completed several installations for Google’s head offices globally and won gold at the Chelsea Flower show with Kate Gould Gardens. More recently, Max developed Reetainer which focuses on upcycling shipping containers, something that Lion Containers Ltd are experts in. In his own words “eco buildings have traditionally been made from timber, mud and tyres and often lacked that cutting edge contemporary aesthetic, having teamed up with the guys at Lion Containers Ltd, we can offer a more modern architectural solution to modular spaces.”

Max shares his time between managing his businesses and his television work which has included BBC2’s “Dragon’s Den”, “George Clarke’s Amazing Spaces”, “Amazing Spaces Floating Homes“, Kirstie Allsopp’s “Fill Your House For Free” and as a judge on “Shed Of The Year”; the latter all for Channel 4 Television. Following the success of “Amazing Spaces Floating Homes”, Max is now busy filming an exciting new series for Channel 4 Television about people creating mortgage free homes.

Please view the Max McMurdo designed container builds below along with specification and costs, please call 0333 600 6261 if you require further information.

A houseboat created from a 40ft container, as featured on “George Clarke’s Amazing Spaces – Floating Homes”. Designed by Max McMurdo and built by the expert fabrications team at Lion Containers Ltd.

A Café Courtyard consisting of 20ft and 40ft containers, built by the expert fabrications team at Lion Containers Ltd. 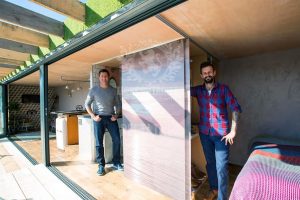 Fill out my online form.
Go to Top