Our client; a social enterprise group, sought to improve an area of Bristol colloquially known as 'The Bearpit'. This area became the subject of research, where it scored consistently high as an unsafe area in the city of Bristol. With the support of Bristol Civic Society and the People's Republic of Stokes Croft, an initial meeting was held in 2010 with a mixture of residents, amenity groups, the Council and police representatives. The Bearpit Improvement Group was formed to implement ideas and prospects for the Bearpit.

We were contacted as they were eager to have some containerised buildings alongside the shops and caf's that were in the Bearpit already. Three years after they initially contacted us, they were finally able to go forward with an idea they had for a containerised commercial kitchen. Our fabrications team worked with The Bearpit Improvement Group to design the layout and specification.?

An aperture and box frame was installed to make way for a standard insulated, weatherproof personnel door. This had a 10 point locking system with a 5 pin anti-drill Euro profile cylinder and full door furniture. Another aperture and box frame was installed for a standard insulated, weatherproof single glazed sliding window with anti-vandal shutters. This included finger bolts and stainless steel anti-knockout hinges. Tie backs were included to prevent the door and window from slamming and rain run-off strips were fitted above the door and window. The paintwork around these apertures were blown in with self-priming specialised container paint.

Two 5' single anti-corrosive light fittings and switches, twenty 13 amp twin sockets, and a 2KW wall mounted convector heater with appropriate electrical protection and external isolator were all installed. Due to the nature of the container's use, an aperture and frame was created to install a 12" extraction fan, this was situated at a high level within the container. An electrical certificate was supplied.? 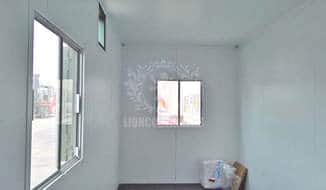