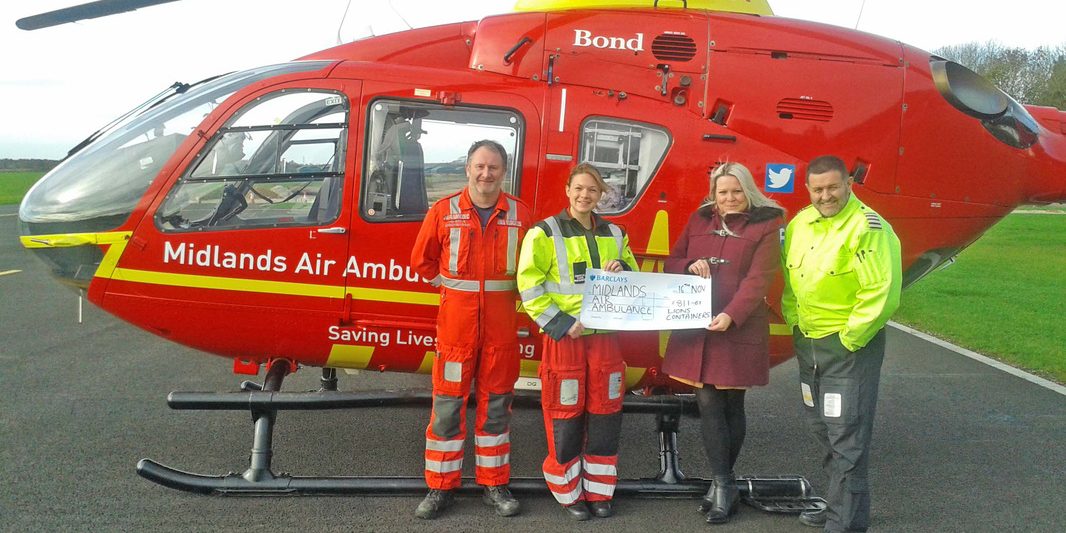 Lion Containers Ltd has raised a grand total of £1667.86 in the past 3 months for The Midlands Air Ambulance Charity, St. Giles Walsall Hospice, Birmingham Childrens Hospital Oncology Department and First Base Walsall.

?The company raised £811.61 at their charity quiz, held in aid of Midlands Air Ambulance Charity at The Village Hotel in Walsall. Quiz attendees raised a total of £386.81 on the evening, and Lion Containers Ltd added to it making the final total raised £811.61. View
event photos >> 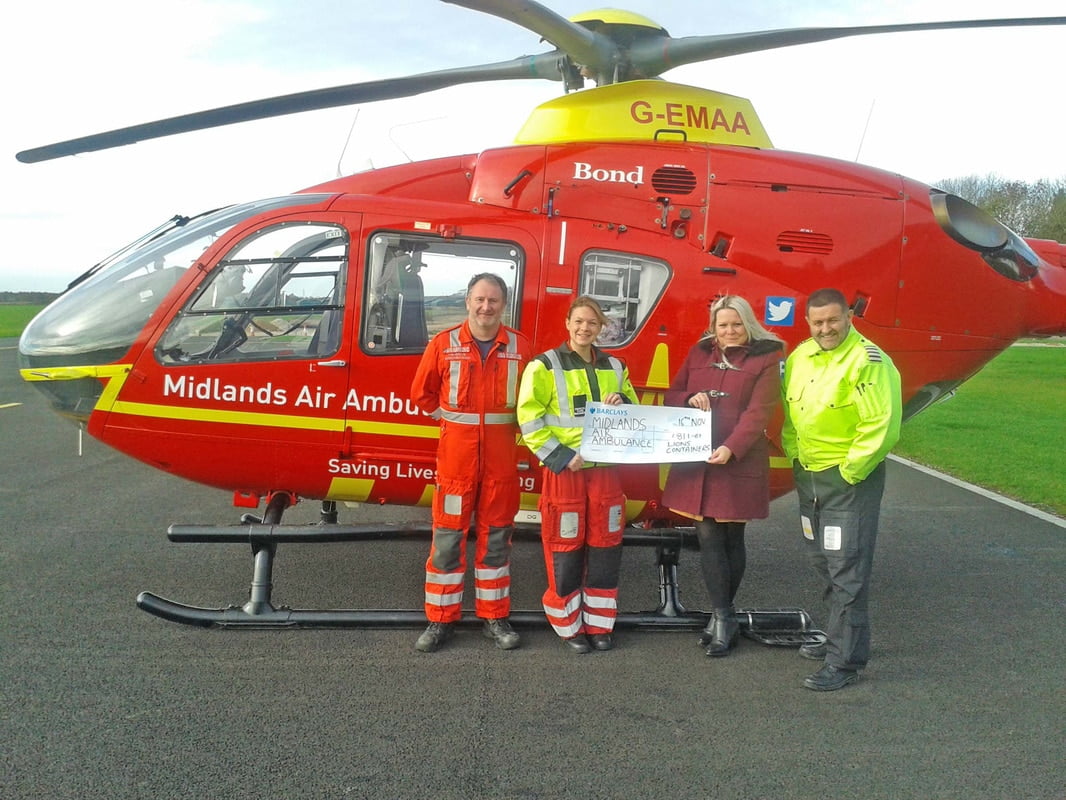 (L-R) Paramedic Iwan Burgess, Paramedic Katherine Lynch, Lion Containers Ltds Sophie Day and Pilot Matt Wood.
14 teams took part in the quiz on Wednesday 9th October, Midlands Air Ambulance Paramedic Katherine Lynch, and Fundraising Manager Adam Williams gave talks, and lots of local and national companies helped by donating raffle prizes. The Midlands Air Ambulance Charity is the only charity responsible for funding and operating three air ambulances serving the communities of Gloucestershire, Herefordshire, Shropshire, Staffordshire, Worcestershire and the West Midlands. Since 1991 the service has responded to over 40,000 missions, if a patient reaches hospital within 60 minutes of injury, their chances of survival are dramatically increased. They receive no Government or National Lottery funding, and each mission costs the Charity an average of £2,500. Around £6.5 million is needed each year to keep the service operational, and all of this is donated entirely by the public and local businesses. This is why charity events such as this are so important; all contributions make a valuable difference to their vital lifesaving service. Lion Containers Ltd would like to thank Joan and Pete Hucker, who gave up their free time to be quiz masters, and to the local companies who donated to the raffle; The Village Hotel, Walsall, Tesco Walsall, Sainsburys Walsall, Dudley Zoological Gardens, Black Country Living Museum, Enoch Evans LLP, Xpress Design & Print, and NPF Bassetts Pole.
Gordon After The Cycle Ride
?The second charity event the company were involved in, was a charity cycle ride on Saturday 17th October in aid of St. Giles Walsall Hospice, who they have previously supported. Gordon Tarburton, Fabrications Manager at Lion Containers Ltd, cycled 65 miles from Liverpool to Llandudno Pier, where his friend John Willett has a memorial bench. John was cared for by St. Giles Walsall Hospice in his final weeks, and the 17th October marked the anniversary of his passing. Gordon completed this ride in just over 5 hours and raised a grand total of £716.25 for the hospice.

?Every year, Brownhills Townswomens Guild hold a progressive meal to raise money for their charity of the year. Members of the Lion Containers Ltd team were involved in the organisation of this, and the company donated £140 towards their efforts. It went towards helping Birmingham Childrens Hospital Oncology Department, and First Base Walsall which is run by the YMCA.

All of these charities have helped members of staff at Lion Containers Ltd in some way or another in the past, and we consider them vital for our local area. We enjoy fundraising, and we hope that we have helped make a different to our community – Sophie Day