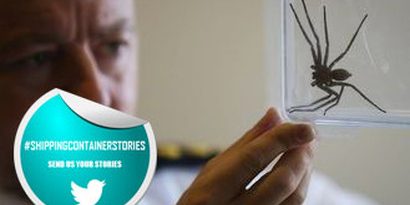 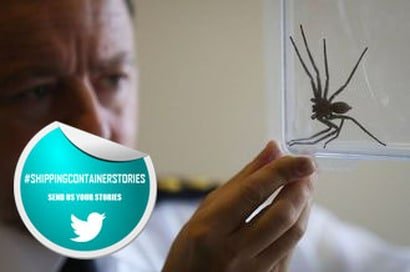 RSPCA Inspector Tony Woodley with the spider
A spider described as “an arachnophobes worst nightmare” smuggled itself into the country in a shipping container from Asia. The 7in long huntsman spider, which can give a nasty bite and is said to be extremely fast, and may be from Australia.

Staff at a BMX distribution centre were empyting parts from the Taiwanese delivery when they spotted the spider. It is thought to have travelled thousands of sea miles! Staff commented that ”
We get containers like this all the time and we have always joked that one day wed open one up to find some kind of ferocious animal in there, but I never expected to find a spider as big as this”


The RSPCA were called and the spider has now been rehomed at Drusillas Zoo Park in Alfriston, near Eastbourne. Tony Woodley, an RSPCA inspector said the spider did not represent a deadly threat.

“Huntsman spiders can give you a nasty bite, but they arent likely to cause too much harm unless you suffer an allergic reaction, he said. However, because they are so big and they run around so quickly, they are probably an arachnophobes worst nightmare. Spiders can survive a long time without food and water. The cold is going to be the main problem for them, but it probably survived the journey because the weather has been fairly mild”

We would love to hear from you if you have found something interesting, or have done something interesting with a shipping container. Let us know and we’ll publish your story with a link to your company (if applicable), we will also publish it on Twitter with the hashtag #ShippingContainerStories. Email
marketing@lioncontainers.co.uk with your story.